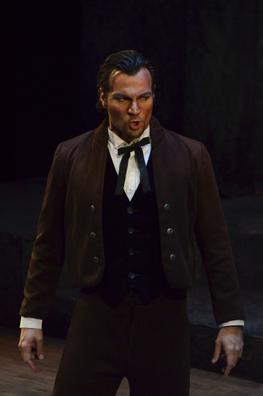 ​​​​​​Bass-baritone Ryan Kuster has been acclaimed for his “full and rich voice” (Dallas Observor), a “commanding stage presence” (Arts Knoxville) and is “at the beginning of an important career” (Opera Warhorses). This season Mr. Kuster returns to Dallas Opera covering Tsar Dodon in the Golden Cockerel and sing the 2nd Armored man in the Magic Flute. He will then return to the role of Figaro in Hawaii Opera Theater’s production of Le Nozze di Figaro and will also be seen as Jesus in the St. John Passion with American Baroque Opera Company.

Last season, he was seen as the title role of Le Nozze di Figaro with Opera Colorado and First Coast Opera. He also sang Montezuma in Vivaldi’s Montezuma with American Baroque Opera Company where he was praised by Theater Jones, “Ryan Kuster’s focused bass-baritone offered the title role a surprising lift. He navigates the quick-tempered character with a tone that is weighted with authority, but effectively agile.” He also sang with St. George Opera in their Waterfall Concert Series in a picturesque setting.

Other recent appearances have included the Old Hebrew in Sansom et Dalila and the Doctor in La Traviata with Dallas Opera, Theseus in Midsummer Night’s Dream with Virginia Opera, Pan in the workshop performance of The Tree of Eternal Youth with American Lyric Theater, the Bass Soloist in Beethoven’s Missa Solemnis with Marywood University, and his return to Virginia Opera to sing Carl Olsen in Street Scene.

Mr. Kuster is also recognized for his portrayal of Escamillo in Carmen with Florida Grand Opera,
Opera Colorado, Virginia Opera, Opera Grand Rapids, Knoxville Opera and Arizona Opera. Opera
Today wrote that “Ryan Kuster gave a strong impression as the handsome and charismatic celebrity,
Escamillo. The difficult tessitura of the Toreador Song seemed easy for him as he sang it to his fans at
Lillas Pastia’s Tavern.” Colorado's Daily Camera wrote, “Baritone Ryan Kuster possesses a
swaggering virility in the role of Escamillo.... The character has the most famous of all the opera's
many great tunes, and Kuster's delivery does not disappoint.” He has also performed La Tragédie of
Carmen with San Diego Opera.

Recent highlights include Lysiart in von Weber's Euryanthe with Bard Summerscape where the NY
Observor said, “They were all fine, in particular Ryan Kuster, smoothly malevolent as the vicious
Lysiart. His lithe bass-baritone never hardened even in the most frenzied outbursts, and the dark, noble
timbre of the voice made his deception seem all the more plausible.” He also received notable mention
for his rendition of the title role in Opera Memphis' Don Giovanni. “Ryan Kuster’s well-voiced Don
Giovanni was charming, arrogant and thoroughly disgusting. Kuster presented a psychologically
fascinating character, in love only for as long as he needed to be, supremely confident, unafraid,
unencumbered by regrets, witty and quick-witted enough to escape a multitude of compromising
situations.” (The Commercial Appeal)

Mr. Kuster’s other operatic performances include of Masetto in Don Giovanni with the Los Angeles
Philharmonic (directed by Christopher Alden, with costumes by Rodarte, and led by Maestro Gustavo
Dudamel), Arizona Opera and Cincinnati Opera; Angelotti in Tosca with Dallas Opera, Pacific Symphony,
Madison Opera, Orlando Philharmonic and Annapolis Opera; the Mandarin in Turandot with Dallas Opera;
Alidoro in La Cenerentola with Opera Saratoga and Nashville Opera; Colline in La bohème with Arizona
Opera and Charleston Opera; Sam in Trouble in Tahiti with Opera Santa Barbara; Don Basilio in Marco
Portugal’s Marriage of Figaro with On Site Opera; and Marullo in Rigoletto with San Antonio Opera.

In 2011 and 2012 Kuster was a member of the prestigious Adler Fellowship Program with San
Francisco Opera, where he gained vast attention and accolades on the west coast for his 59 mainstage
performances in 2 fall seasons. At San Francisco Opera he performed Masetto (Leporello cover) in
Don Giovanni, Escamillo in SFO's Carmen for Families, Mozart's Requiem, Astolfo in Lucrezia
Borgia, the Mandarin in Turandot, Angelotti/Jailor in Tosca, 4th Noble in Lohengrin, and Count
Ceprano in Rigoletto. Mr. Kuster is also on the DVD release of SFO's production of Lucrezia Borgia
with Renée Fleming. His relationship with San Francisco Opera began when he joined the Merola
Program, where he appeared as Garibaldo in Rodelinda, Don Bartolo in Il barbiere di Siviglia, and Dr.
Cajus in Die Lustigen Weiber von Windsor in the Schwabacher Scenes Program.

Mr. Kuster has been very successful on the competition circuit, recently being awarded 1st place for the Igor
Gorin Award. He also sung on the Metropolitan Opera stage as a National Council Semi-Finalist, received a
3rd place prize in the Gerda Lissner International Vocal Competition, received a Grant from the Licia
Albanese-Puccini Foundation Competition, the Harmon Award from Chautauqua Opera, and was given the
Encouragement Award in the Philadelphia region of the Metropolitan Opera National Council Auditions.

Mr. Kuster earned an Artist Diploma at the Academy of Vocal Arts where he performed many roles
including the Governor in the world première of Margaret Garwood’s The Scarlet Letter, Schaunard in La
bohème, Enrico in Anna Bolena, Dikoj in Kát’a Kabanová, and Don Alfonso in Così fan tutte. Mr. Kuster
holds a Master of Music degree from Boston University and earned a Bachelor of Music degree from
Westminster Choir College.